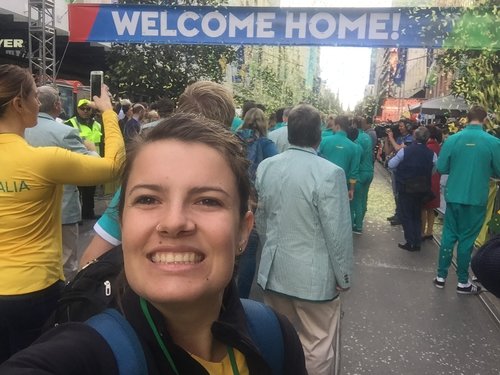 What does your role at Sold Out Events entail?
Managing events and client relationships
Unofficial role: Boosting team morale!

What do you like most about your job and what do you like the least?
Best: Two things, because it was tough to only pick one.
1. Getting out onsite, working hard with the team
2. Seeing a happy face on my clients when they see each event come together

Least: The lack of sleep.

How did you get started in the events industry?
I actually wanted to get into exercise science when leaving school (crazy to think about now!) I took a year off to travel and while in New Zealand I met an event manager. The excitement and the stories she told hooked me straight away and I haven’t considered a different path since!

Do you travel for my job?
Yes! My favourite trip has to have been the Australian Olympic Team’s Welcome Home Celebrations. We travelled to Sydney, Melbourne, Canberra, Brisbane, Adelaide, Hobart and Perth in 8 days. It was tough but super exciting.

Where would you like most to travel to for work?
Maybe somewhere international…… because it would be super exciting.

What has been your favourite event/activation to work on and why?
My favourite event has to be Light The City. This event is part of the City of Sydney’s Sydney Rides Festival and it is a night-time cycling event at Mrs Macquaries Chair.

This event is so close to my heart as it was my first large-scale event that I had managed on my own. There are so many elements to this event that make it such a challenging project (including road closures, multiple suppliers and stakeholders etc) but so much fun and extremely rewarding.

What is something about your job that most people wouldn’t know?
It’s definitely not latte’s and business attire!!!!

I can’t remember a day where I didn’t spend at least 15 minutes in the Sold Out warehouse tidying, cleaning equipment or packing/unpacking from an event. That being said, I wouldn’t have it any other way.

What is the most unusual thing you’ve seen or done while working on an event/activation?
I assisted in helping to distribute 5,000 apples in a small town in Melbourne earlier this year. That’s something many people can’t say they have done.

Have you ever met a famous person while working on an event/activation?
I got to meet Casey Donovan at ‘This is Australia’ – Australia Day Celebrations at Barangaroo this year. I also met Wippa (from Fitzy and Wippa on NOVA) recently at Race for the Kids.

They were both super nice and down to earth.

If you could swap jobs with anyone else in the company for one day, it would be:
Marika from our Human Resources Department because she never has to lift crowd control barriers.

If you had to pick a movie title to describe your job, it would be……
Yes Man – because at Sold Out, we can do anything and everything!

Do you have a party trick?
I am a fantastic singer – just ask everyone in the office! Hahaha