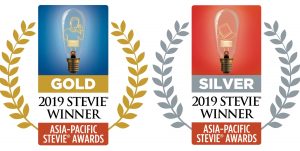 The Stevie Awards are widely considered to be the world’s premier business awards, and more than 900 nominations from organisations across the Asia-Pacific region were considered this year.

SoldOut CEO Thomas B. Staunton said he was honoured that the hard work of the SoldOut team had been recognised internationally.

“At SoldOut, we’ve been delivering international events for more than 25 years, and our team continually strive to produce new and exciting experiences.

“We are thrilled to received Gold and Silver awards for Innovation in Government Events and Innovation for Entertainment Events, for our work on the Gold Coast 2018 Commonwealth Games.

“We’re also delighted to be joining an esteemed alumni of global Stevie Award winners including Apple, Mercedes-Benz and Accenture.

“On behalf of the SoldOut team, I’d also like to congratulate all the nominees and winners of this year’s awards,” said Staunton.

Gold, Silver and Bronze Stevie Award winners were determined by the average scores of more than 100 executives around the world acting as judges.

“We are very pleased that entries to this program grew again this year,” said Michael Gallagher, president and founder of the Stevie Awards.

“We extend our warmest congratulations to all of this year’s Gold, Silver and Bronze Stevie Award winners.”

The Asia-Pacific Stevie Awards are the only business awards program to recognise innovation in the workplace in all 29 nations of the Asia-Pacific region.

Nicknamed the Stevies for the Greek word for “crowned,” the awards will be presented to winners at a gala banquet at the InterContinental Hotel in Singapore on Friday, 31 May.

Details about the Asia-Pacific Stevie Awards and the list of Stevie Award winners are available at http://Asia.Stevieawards.com.