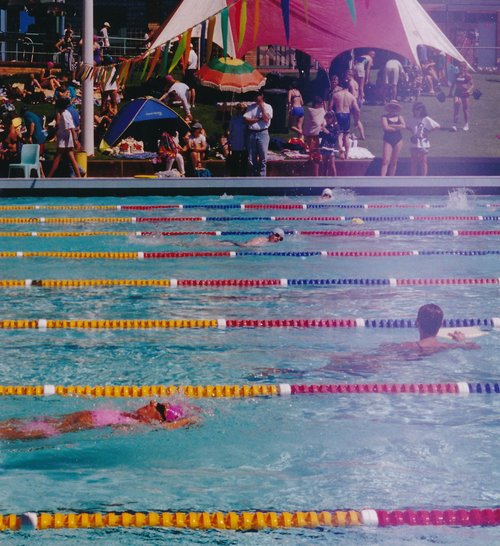 A gruelling nine-hour relay swim at Sutherland Shire’s outdoor pool, the Splash Marathon Swim was a popular charity event which ran for 12 years mainly throughout the 90s and raised more than $1 million for the Children’s Cancer Institute (CCIA).

This community project was the brainchild of Sold Out Events’ founder Wayne B. Staunton and was developed purely as a community event. It was not about who could set the fastest lap time or swim for the longest amount of time. The only prizes awarded were to the highest fundraisers.

This event was run as a not-for-profit project with upwards of 20 teams taking part each year including friends, families, adults and children. All participated in the relay swim and a whole host of activities and challenges throughout the day to raise funds and entertain the crowds.

Splash Marathon was attended by many Australian sporting celebrities over the years, and the event was so loved that it grew into multiple events which were run simultaneously in Penrith and Noosa.

Because of Wayne’s dedication to raising substantial funds and his tireless work on the Splash event, Sold Out Events was named as a lifetime benefactor of the CCIA.